Under Affiliation of Cycling NSW. 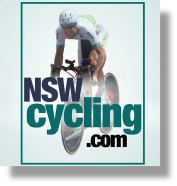 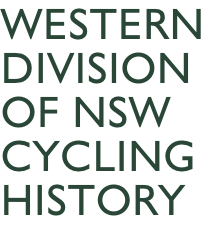 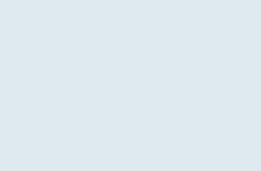 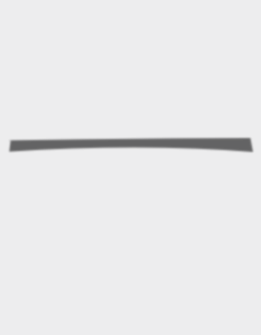 Separate Female and Junior Titles where run at some Championships events in the 1990’s and we are still investigating prior to that time to find the first Female Title event.

In the 1990’s the traditional championship format was changed to a handicap series.

The Classic Road Championships format of the late 20th Century was also notable for the introduction of Women’s and Juniors categories such as the 1993 Western Division Championships at Mudgee where Lithgow’s National Rep Jim Allen defeated Dubbo’s Craig Olsen and Bathurst’s Mark Windsor and the current NSW junior state medallist Kylie Dudley defeated Kerryn Windsor in the Women’s Championship (held 22 May 1993). Also that day a number of future champions including Mark Renshaw and Toireasa Ryan raced the Junior Titles and it should be noted that the 1993 championship also contested Masters Titles.

It was commonly believed that the Western NSW Cycling Premierships (1998-2010) format was the introduction of a champion Clubs Title to NSW Cycling’s Western Division however it had been done before in the 1940’s. Very Talented Orange Cyclist Sid Crooks was in super form in the 1947 – 48 season winning both the 1 and 5 mile Western Division Titles, while around that time Dubbo had good depth with riders such as Peter Whitely winning the 1946-47 3 mile Western Division Title and Laurie Williams taking silver behind Sid Crooks in 1947-48. However the reports describe the Bathurst team of Buttsworth, Doulman, Thomas & Edwards defeating Dubbo in the 1949 Whitney Cup for the champion club title.

NOTE - If anyone has information on old Western Division Champions please forward to the WD Committee.

One of the major goals of the NSW Cyclist Union was the setting up of championships events, so the first of NSW’s Divisional Championships at the Bathurst Sportsground in the 1880’s on the Ironic High Wheelers was significant in Australian Cycling history.

Until the forming of the NSW Cycling Union in 1883, so called championships titles were more like grudge matches, using a similar format as boxing were promoters and the media laid claim to unofficial titles. General high profile riders would challenge each other to a race for money and a non regulated title. Its not surprising then that the NSW Cycling Union would be a strict Amateur Body free of money corruption to establish the first truly run Inter Colony Championships in the 1880’s.

Taking their policemen role very seriously, the NSWCU aimed to develop regional bodies in NSW to decentralize authority and act as a watch dog through out the state, with initially Northern, Southern and Western NSW Unions planned. While good communication between the clubs in Western NSW resulted in the Western Districts Championship approved in 1886 the effective setting up of the Divisions across the state was a more difficult assignment with arguments over Boundary's and Jurisdiction slowing the process across NSW as a whole.

The First Regional Championships in the Colony:

The Western NSW Cycling Championships are very significant in Australian Cycling history being the first of the colonies Divisional Championships. The inaugural Western NSW titles where contested in the 1880’s on the Ironic High Wheelers with the Bathurst Sportsground carnivals drawing top class entries.

The NSW Cycling Union sanctioned the first Western Districts Championship in 1886 with the Bathurst Bicycle Club bravely experimenting with the running of a track promotion in the middle of summer which of course has become the accepted procedure in modern times.

Entries for the New Year’s Day 1887 One Mile Bicycle Championship of the Western Districts included Wellington champion G.D. Ferguson who would challenge local stars the Ashworth brothers, J. Hemsley, W. Roberts and C. W. Mills. The meeting also including entries from New Zealand and the reigning champion of the colony C.R. Woods.

While the penny-farthing era created huge hype in the 1880’s, the development of the Safety Bicycle and Pneumatic Tyres in the 1890s opened the sport up to even more people and as a consequence a wider range of championships were introduced - 1, 5 and 10 mile Western NSW Championships were contested in 1890. But the sport didn’t only have to contend with a massive change to the Bicycle, as the Administration was under attack with the development of Cash Racing with the forming of the Austral Club in Sydney and the consequently the establishment of the League of Wheelman.

Clubs like Bathurst with a close allegiance to the NSWCU would battle as cycling administrators debated the merits of racing for cash. So while the Orange Bicycle club  established itself in the less regulated period (and other such as Lithgow thrived), the Bathurst cub was battling and segregating itself into Amateur and Pro Clubs. This resulted in some new names appearing on the Western Division Honour Roll, with Lithgow’s Horace Jones recording 15min 12 sec to defeat Campbell and Roth in the 5 mile Championships at the fourth Annual Lithgow Carnival. Jones and Campbell riding the “so called” Safety Bicycle with Pneumatic Tires while Roths decision to stick to the “cushioned wheels” proved to be a mistake as the bicycle design changed dramatically.

WESTERN NSW CHAMPIONSHIP RESULTs - “The Introduction of the Saftey Bike”

New Bikes, New Administration resulted in a bicycle boom period before World World 1 in World Cycling. The sport would introduce Road Championships and new events would appear on the track such as the Madison & 6 day racing, with Western NSW developing into home of some of the world’s greatest 6 day riders.

In 1904 the Western Division Union included clubs such as Bathurst, Orange, Lithgow, Portland, Mudgee Caledonian, Blayney, Gulgong, Dubbo, Nyngan and Nymagee. In a clear example of the body catering for the specific needs of all cyclists in the region the President of Western Division, Mr G Yates of Lithgow surprisingly stated it was also a goal of their team to develop racing for the League riders (the Pros) as well as the Union (the Amateurs) who they were affiliated with.

In more recent times Female and Junior Championships were added to the Western Division Championship Program and even the format of the championships would change going into the 21st century with a Handicap Series introduced to attempt to cater for a wider range of Cyclists.

NOTE1: Although it may be an impossible task to compile all Western Division Championships Results since that first title in January 1887 we do hope to honour as many champions and participants as possible. If you have any info on old Western Division Events please forward to a member of the committee.

NOTE2: Please see the side panel for further info on the long history of divisional championships in Western NSW.

The introduction of a high profile regional development program at the Western Region Academy of Sport by CNSW in the 1990’s  increased the need for more regional based racing to identify new cycling talent in Western NSW. In 1998 a series was introduced which involved Bathurst, Dubbo, Mudgee and Orange all holding handicap events through the season with accumulated points deciding the winners in different categories, including champion Club. During this period the Champion Backmarker Title was considered an excellent gauge of the Open Elite Western Division Champion. Other categories included the Champion Female rider and also the Handicap winner for the season which was considered the Grade Champion.

For the next decade the Series proved very successful, although in 2004 when it was decided that a traditional western Division Title could also be contested to return to the more accepted method of deciding the division’s champions. The traditional championship was raced over longer distances at Orange and resulted in a win for Bathurst’s Dean Windsor over Orange riders Owen McPhillamy and Mitch Chapman, which strangely was the exact same result as that year’s Premiership Champion Backmarkers Title. Consequently the Traditional Championships were only contested a couple of time during the Western NSW Cycling Premierships period.

The series was changed to a team format in 2009 which proved difficult to run and fizzled out in 2010 with a more traditional format reintroduced in 2011.

For More Information and Full Results CLICK on this Link

New Era returns to the Traditional Format in 2011:

Western NSW Premierships was contested in 2009 when a Teams Series was Trialled, Resulting in a win to Mudgee Team No.1 (which included Carl Holleman,Rick & Kim Thomas and Chris Hensley). The Teams Formats was again started in 2010 but wasn’t completed as it became difficult to run.

Following the successful Western NSW Premierships approach, (introduced in 1998), the most recent era of the Western NSW Championships started in 2011 when a new Working Party Committee approach was proposed, with the Guidelines approved by then CEO of CNSW Kevin Young. The first of these Western Division Championships was the Road Titles contested in Mudgee in 2011 with Time Trial, Criterium and Track Championships all following in recent times.

For More Information and Full Results CLICK on this Link 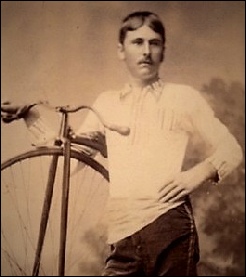